The Five Sided Tower of Virtue

I just discovered my new core value hero. He was an amazing athlete and coach, received the Presidential Medal of Honor and has streets and buildings named after him. He won 10 NCAA national basketball championships, the most of any men's college basketball coach. There is even a life-sized bronze statue of him caught in the act of coaching prominently displayed off Georgia Street in Indianapolis.

Success is peace of mind attained only through self satisfaction in knowing you made the effort to do the best of which you're capable.

How did Wooden do all that and more?

John Wooden figured out the traits that needed to be understood and modeled to succeed. He famously codified them and turned them into a pyramid. The values were at the bottom, built layer-by-layer with success at the peak. The team focused only on what they could control - how well they lived the values outlined in the pyramid. Success, the peak, was much more likely to come if they did the work and acted in alignment with the team’s core values. I have been a bit obsessed by the idea of core values ever since we did our first ArcStone retreat and figured them out way back in 2001. Core values are still a big deal for us.

Wooden's value pyramid is a whole order of magnitude more epic than ArcStone's simple list of five. I mean, heck, it's a whole pyramid. It actually has a cool shape and it’s helped win many national championships. Perhaps we need a “Five Sided Tower of Virtue” for our values.

Here's my text-sketch of Wooden's pyramid. 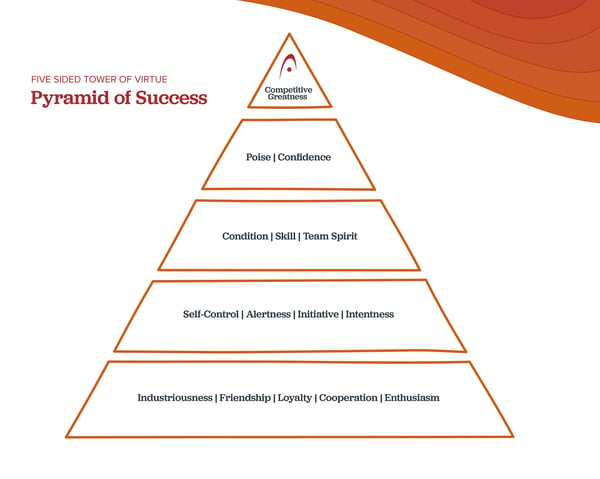 Everything below the dashed lines are traits that can be cultivated, recognized and developed. Success is not something you get automatically, but it can be consistently grown by cultivating certain traits. I love the fact that Wooden also acknowledges fortune's role in worldly success. You lay the foundation for worldly success through effort, but luck plays in. And it’s good to remember his quote - that true success comes from within, via the "self-satisfaction" that you gave your best effort in alignment with your values. You control your effort, but not the outcome. That's honest and real.

We do our best to instill our core values by having frequent discussions around their practice and recognize them when they appear "in the wild.” We call out team members that demonstrate the values as they go about their work. Conversely when an ArcStoner does something that isn’t in accordance with our values, we pull them aside and talk to them.

Since we no longer share a physical office, it is more important than ever that we keep our principles front and center. Our shared values give our team members a compass. Each ArcStoner will make hundreds of decisions per day. Even though we're not together physically, our day-to-day decisions have a good chance to be in alignment because they are, when we're at our best, guided by that shared compass - our values of service, craftsmanship, evolution, harmony, and happiness.

Our values are a big part of why we focus our work on nonprofits. The mission driven nature of nonprofits resonates with the true North of our compass.

Wooden defined what "best effort" meant with his values. He lived it and built consistently amazing teams around his shared vision. By doing so he touched thousands of lives in the world of basketball and continues to inspire people.