The Happy(our): Collaboration event was on May 16th, 2019. If you missed the event, here is a recap and great quotes from our panelists: Adam Levy, Chanida Phaengdara Potter, Joe Horton, and Ken Brahmstedt. 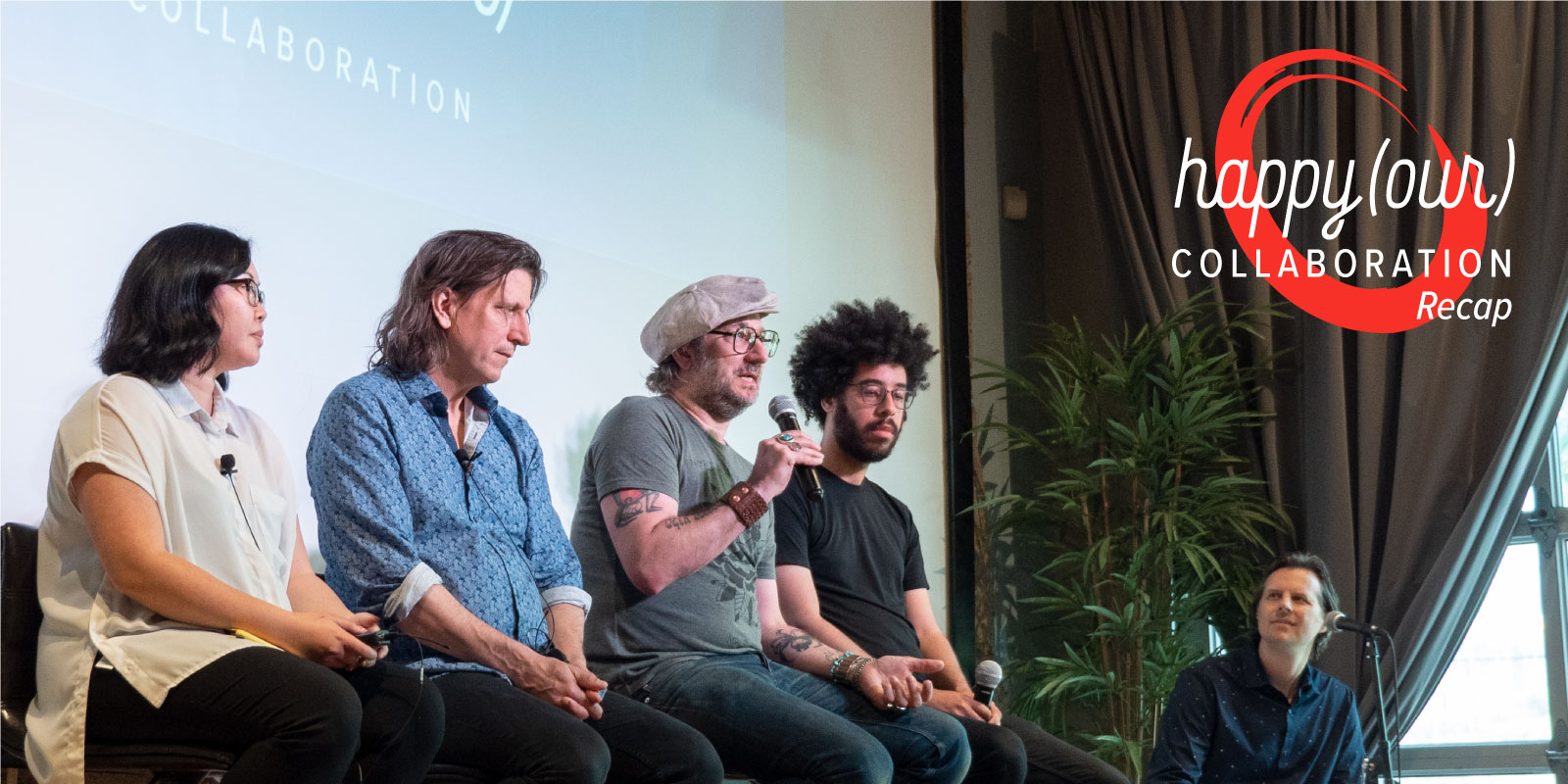 ArcStone first started the series of events related to its core values in November 2017. The first one was on Happiness, which was why it chose Happy(our) for the series. It was an obvious play on the phrase happy hour, but altered to be more reflective and it ask the question “what does happiness mean to me?”

At first, the name Happy(our) was supposed to be specific to the happiness event. But, thinking deeply about each of ArcStone’s other core values — Service, Craftsmanship, Evolution, and Collaboration — a realization came that happiness was linked to all of these values in some way. The more that ArcStone did these events, the more that became clear.

No matter what event that is being planned or managed, whether that is a birthday party or a wedding, it is never easy to predict the outcome. Every logistical detail can be excessively planned, but how people will respond or react will always be unknown. That’s what makes these Happy(our) events exciting, especially when it comes to the panelists. When bringing together four different people to discuss a topic it’s always a mystery to how it will go or what they will say. 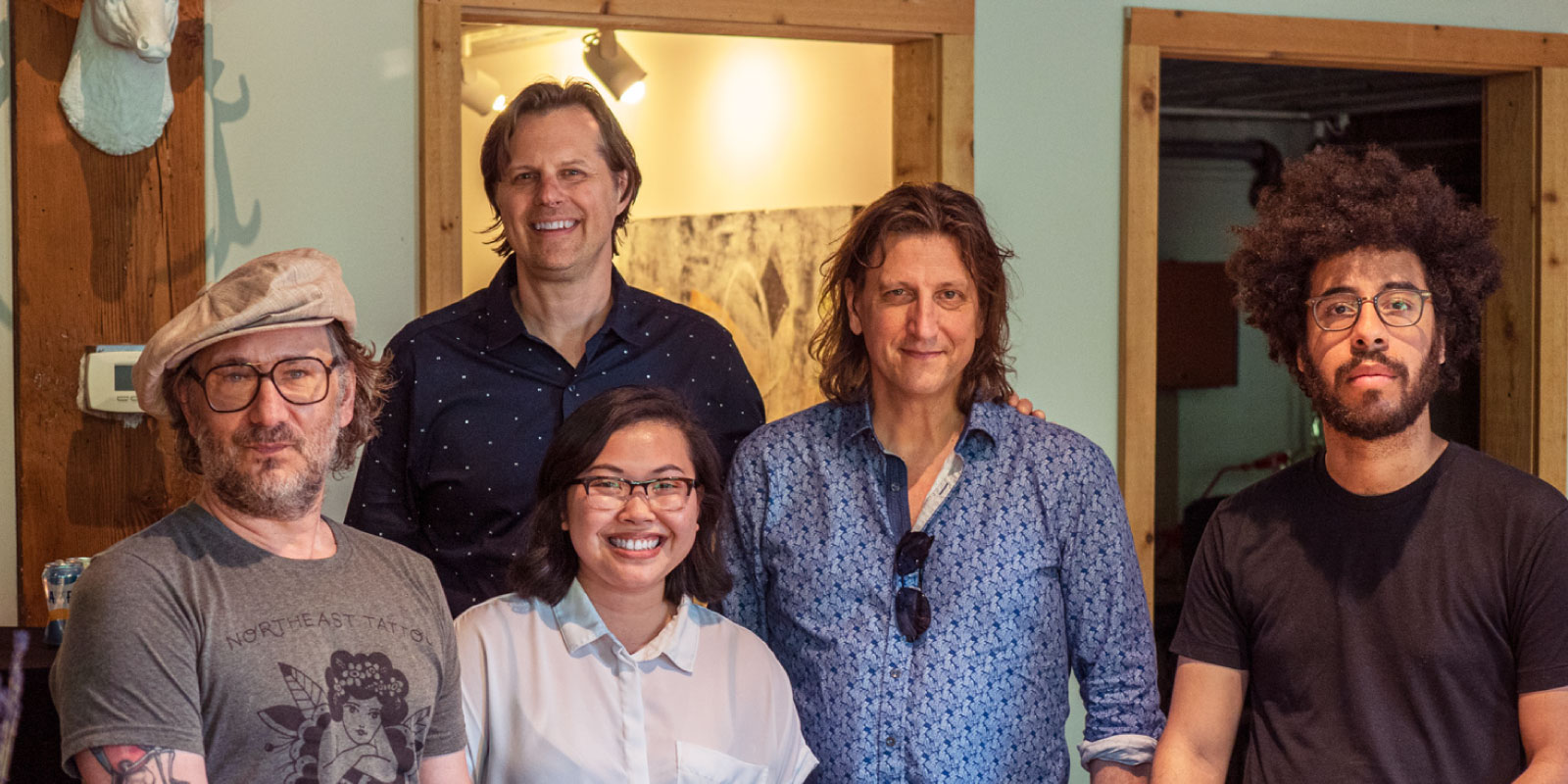 The most recent Happy(our) event was on Collaboration, and the panelists were: Adam Levy, Chanida Phaengdara Potter, Joe Horton, and Ken Brahmstedt. Moderated by ArcStone’s CEO and co-founder, David Carnes, the discussion began with the panelists sharing how collaboration played a part in their work.

For Ken, the projects that he gets the most jazzed about are when there are large numbers of people “working together on a single project and having everything just gel.” He also talked about technology, and how collaboration had often meant individuals working alone and only interacting with teams through the digital space. But, Ken had started to see a change. “Quickly people start to burnout on the alone-ness of it all...There tends to be a gravity back to the healing connectivity.” 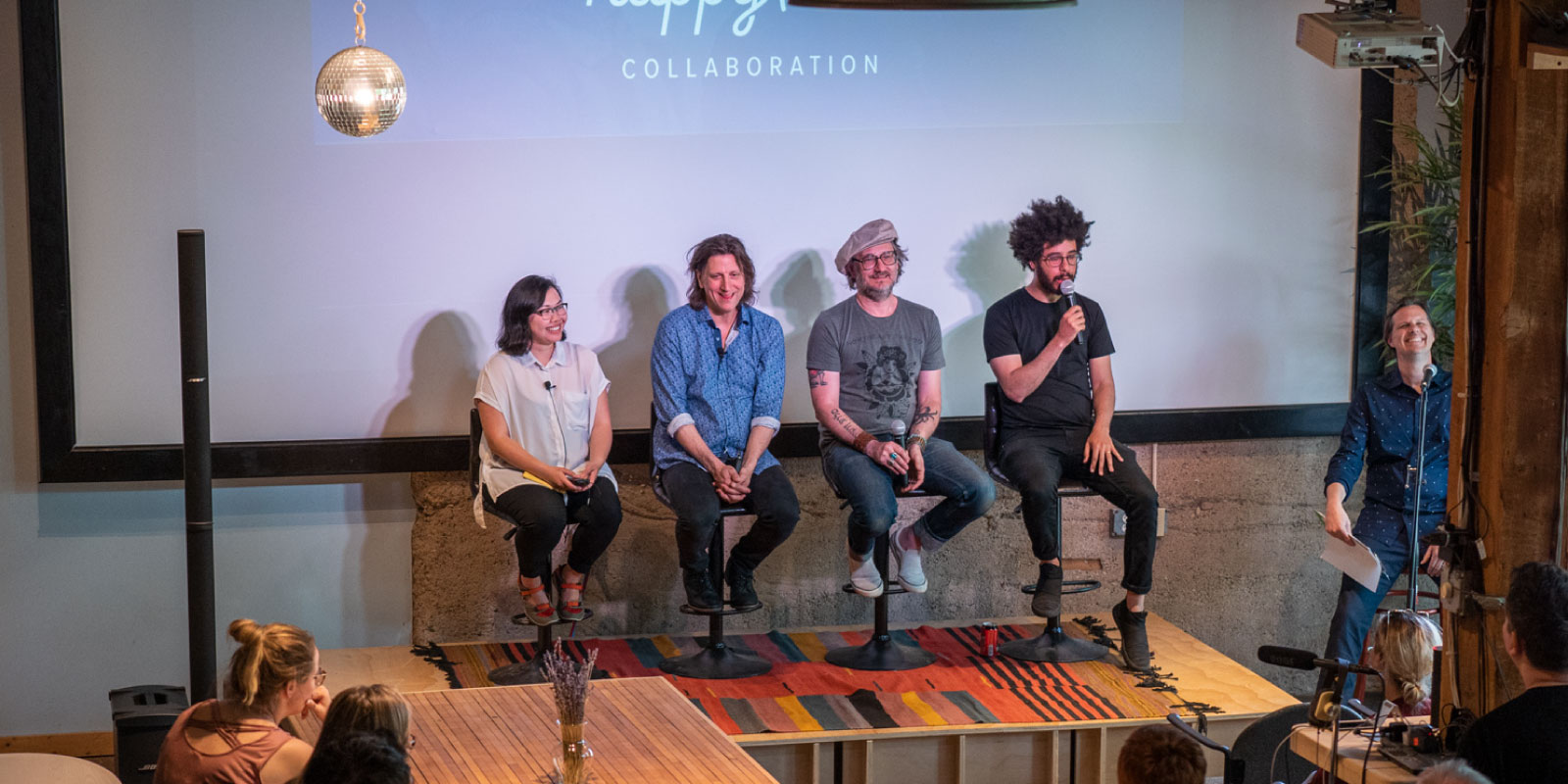 Adam explained how leading collaborative environments were all about working with people who knew more than him. To assure success, it was important that he lead projects by “providing an environment where everyone felt like their contributions were really important to what’s going on...everyone has a vested stake creatively in it.”

Joe talked about being surrounded by the right people. “I have a hard time going along with the idea that we know what existence is, or what life is...I have a group of people around me, who understand that about me. And, who have learned how to take that energy and turn it into fuel for other things.” Joe also created a comedic analogy to describe how collaboration works. “It’s really a messy process. We don’t know what the process is at the end of it. We don’t know who touch what when...I guess it’s kind of like an orgy in that sense. You don’t know who touch what when, but everyone leaves satisfied and it’s all good.” 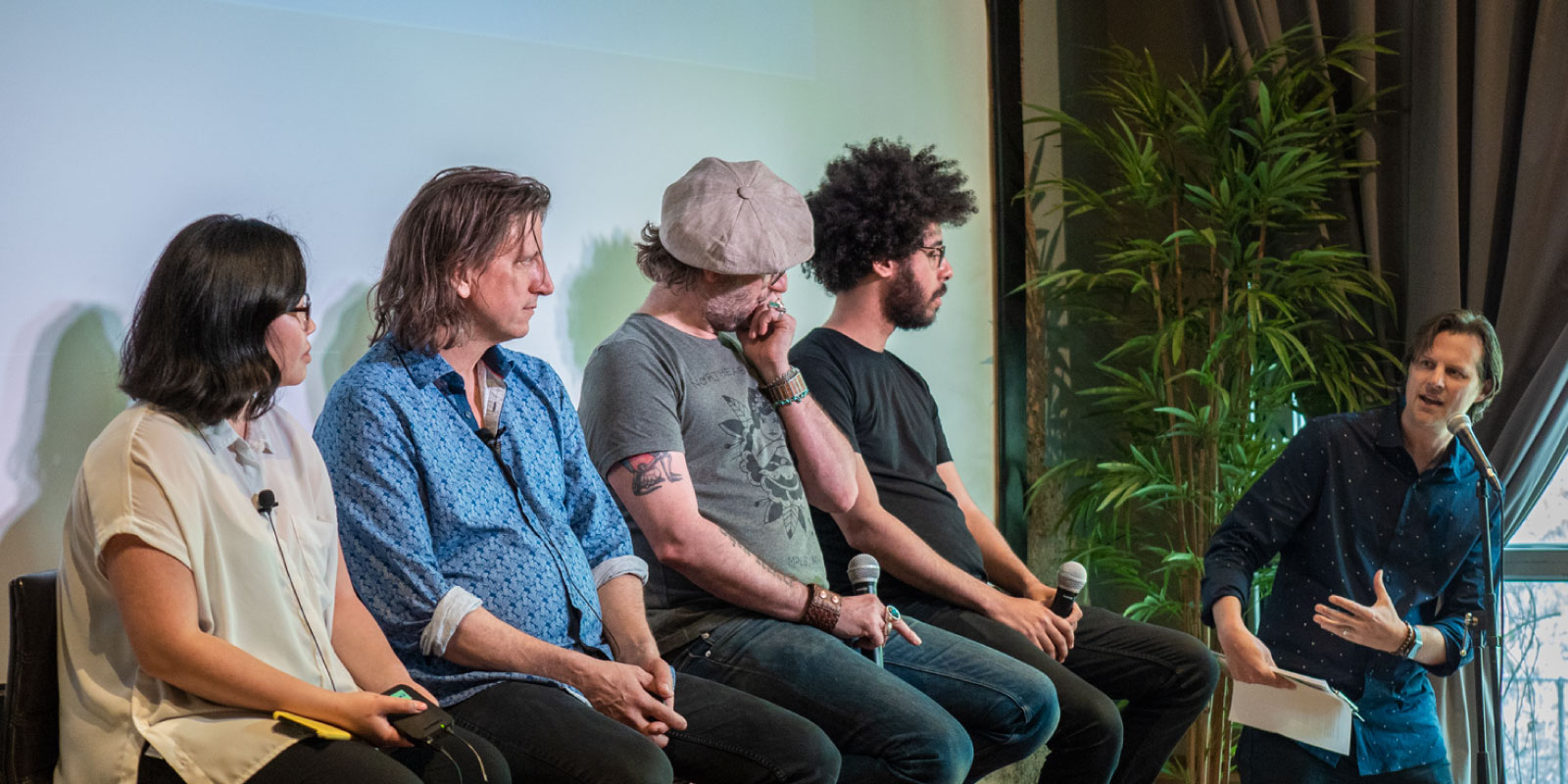 ArcStone has been wondering whether the word collaboration was the right core value that represented the work it does. As David said at the event, “it’s kind of trite. It’s one of those cliche core values.” To explore possible alternatives, David asked the panelists for help and to see what words sounded better to them.

Inspired by Buddhism, Joe enjoyed the word interbeing. The reason why was because “it gets at the fact that we actually don’t even ever exist independently from one another. Our being is co-occurrent — it’s happening at the same time...If you’re in a collaborative environment, really recognizing the ground of existence that you share together, opens up a space where everyone can be heard.”

Chanida went into the realm of biomimicry, and took inspiration from mother nature. “Cross-pollination...just returning to mother nature and earth, and all the natural processes. Our very being is to collaborate, and I think that’s the clear definition of that.” 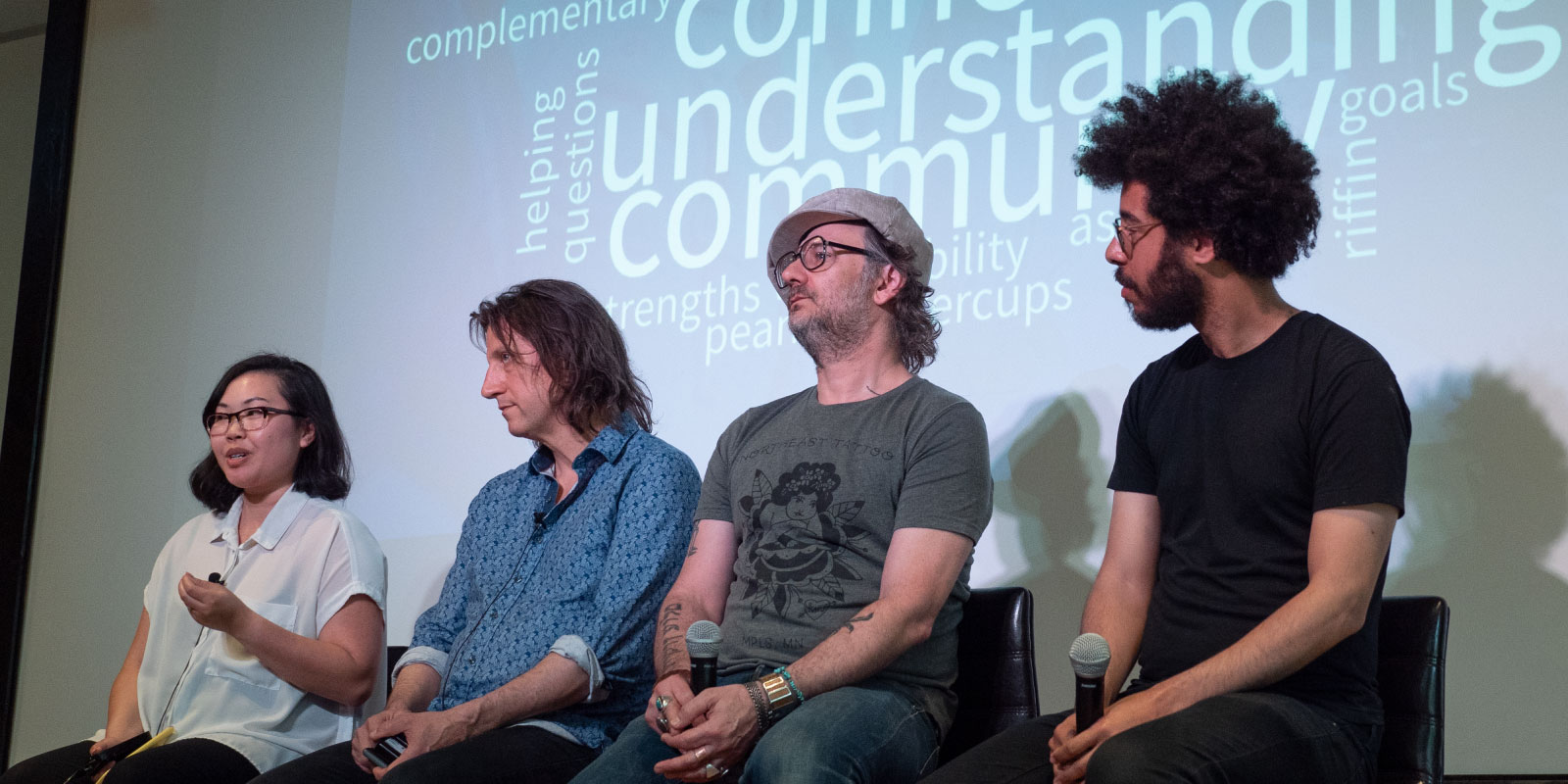 What was great about this point of the discussion was that it went beyond talking about the panelists’ work, and started to touch on overarching themes. This produced great dialogue, like the exchange between David, Chanida, and Joe.

[David] “And the resistance to that interbeing, right now, is getting us into all kinds of trouble.”

[Chanida] “Exactly...We don’t know how to be human, and recognize each other’s humanity.”

After Ken and Adam added their words, coexistence and symbiosis, Chanida pointed out how important it is to be aware of language. “Language is so fluid. Until we understand how we define some of those types of words, we don’t really understand how to embody it.”

Everyone struggles with going against the simplicity of binary thinking. It’s easy to choose and think in extremes — something is either good versus bad, or black versus white. But, in the end, everything is on a spectrum and it’s all about balance. As Ken said, “there’s no way to collaborate without compromise.” 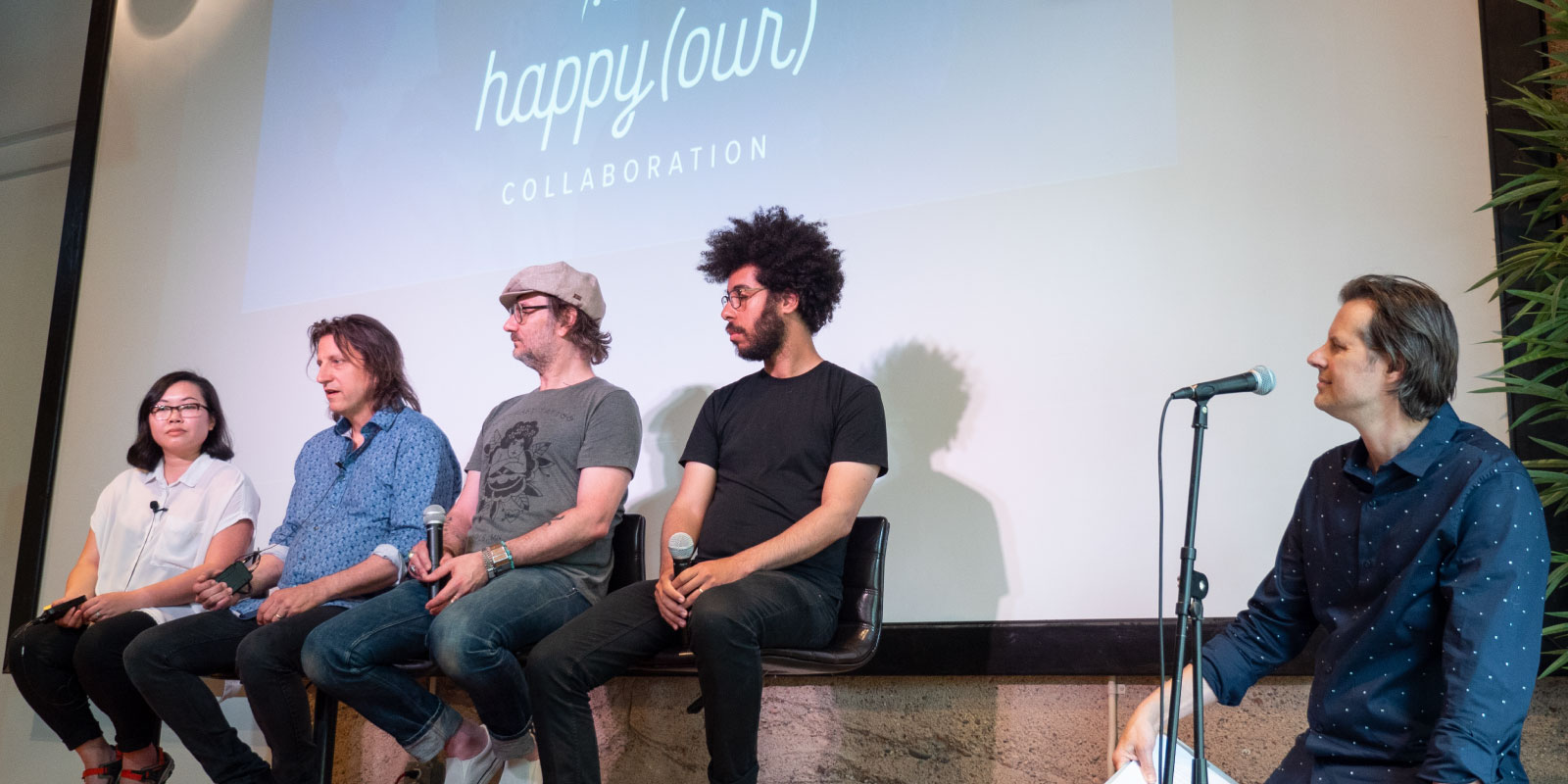 The two must be in harmony, but Chanida also points out that it’s important to ask yourself — “What are you willing to give up in order to thrive? What are the boundaries that you have, that you have to protect, in order to not lose your sense of self?” She also added that, “there's compromise, but there’s also a level of consensus that needs to happen. I think that’s the key thing...the more consensus we’re able to build among each other the better that everyone is well off. That we don’t have to operate from a place of taking all the time. That we’re able to give and share.”

Adam agreed and said, “developing consensus is essential. And, just not being too married to any of your own ideas.” But, all the panelists agree that this doesn’t mean that coming into a collaborative space with an ego and opinion is a bad thing. Ken pointed out that it’s important to have a fierce opinion. “That’s vital for collaboration to work effectively. If you don’t have a fierce opinion, you’re really not working in the group — you’re a side player.” 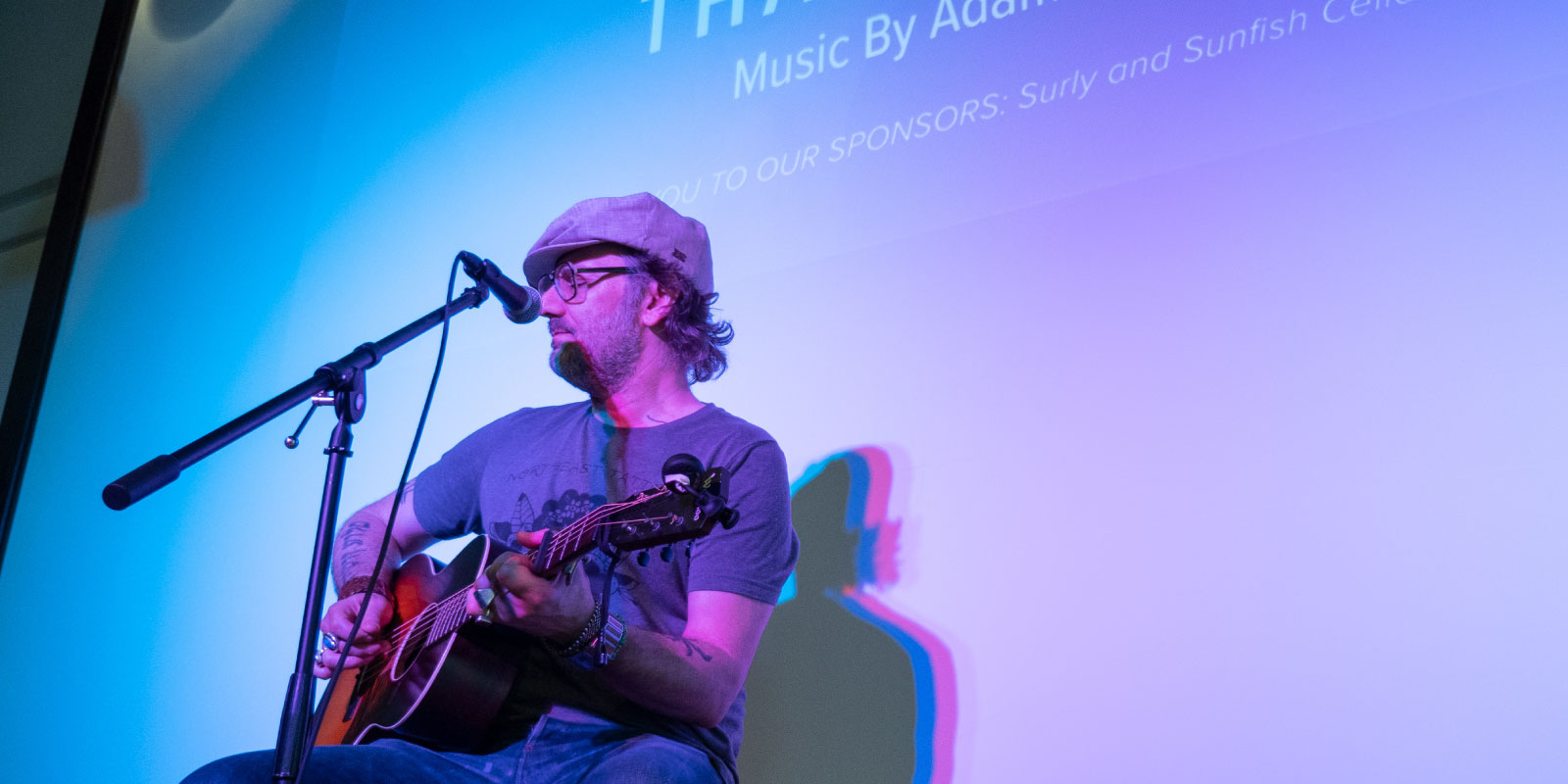 Ken added that “to collaborate effectively, you need to push your opinion out there. And I do think that involves ego. I don’t think collaboration is an ego-less environment...You have to come with your ego, you just can’t dominate with your ego. You have to be ready to back out and say, ‘Yeah. Maybe I was wrong.’”

In the end, the panelists said that collaboration meant that even if you didn’t necessarily agree, make sure that the people involved in the collaboration are working towards the same end goal. As Chanida said, “You’re trying to grow something beautiful together when you do collaborative work. I think if we don’t focus so much on intention, but impact. You talk about the bud, the thorns, it all exists. But, it’s about the rose that grows that matters."

Check out our recorded Facebook livestream of the discussion!

Collaboration in Three Words or Less

At the end of every happy(our) panel discussion, to try and sum up the core value, the panelists are asked to describe what the value means to them in three words or phrases. Here are the panelists' words for collaboration:

Joe stated that we all have the same exact authority, and asked the audience to “think of three words in your mind, and pretend I said those three words.” 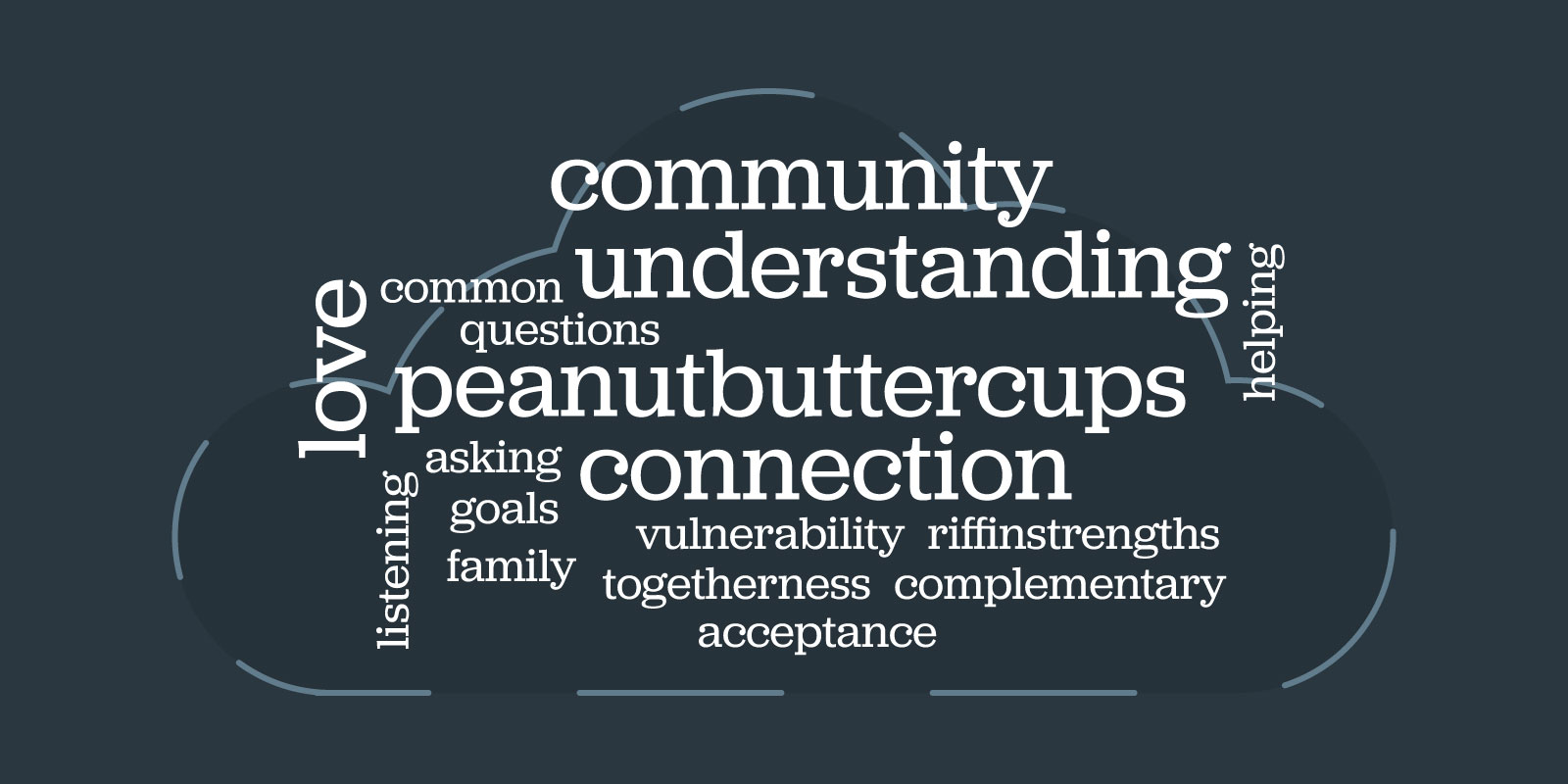 The audience was able to participate in the discussion by sharing what collaboration means to them in this word cloud.

This discussion went to places that many people probably wouldn’t have expected. Classical music, psychedelics, and Indigenous knowledge were all somehow weaved into the conversation. But, it was easy to take notice that there was this overarching theme — to collaborate is to connect with each other. Working together and acknowledging each other’s existence is what leads to success, and subsequently, happiness.