After Hours with Mike Sasorith 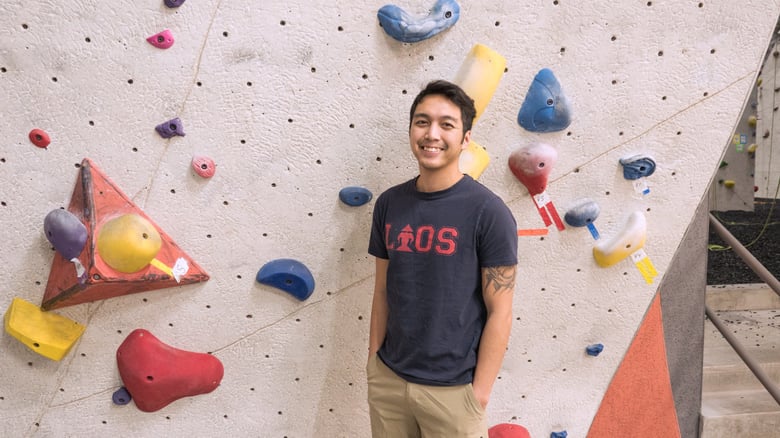 In the moment when your fingers are hurting and you can no longer hold on, everything is telling you it’s time to let go and find a new hold. This is a lesson ArcStone designer Mike Sasorith discovered through climbing, and it’s also a metaphor he filters into his life.

Mike didn’t connect with athletics while in grade school and found it difficult to get into any kind of sport later on in his life. It wasn’t until 2015 when his girlfriend, Nancy, needed a partner for climbing did he connect with a physical activity.

“I didn’t like the stigmas connected with most sports. The comparisons and judgments of what supposedly determine masculinity – your strength or how fast you are,” Mike shares.

“That’s why I was so hesitant to do any organized sport. At first, I thought climbing had those stigmas. But, I realized that a good climber does not solely rely on their strength, and you can't really compare yourself to other climbers. A lot of people, usually men, will make that mistake of judging based on size at the climbing gym. They’ll see Nancy, who’s smaller, do a problem easily and think to themselves that if she can do it then they can do it. Then they get on and struggle.” 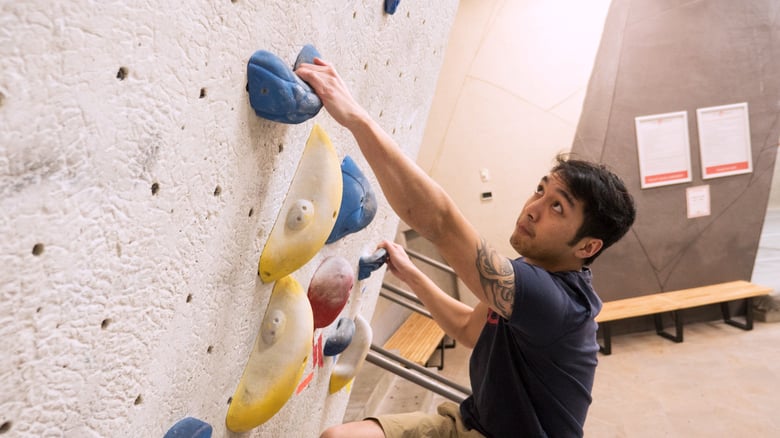 For climbing, different body types work in different ways. Smaller hands sometimes work better for the crimpy holds, while larger hands may allow you to get a better grip on big holds. The important thing is progression, Mike explains. “After you’ve been doing it for a while, you get out of that feeling of being stupid when you fail. You learn better if you fail. You ask yourself, ‘What didn’t I do that time? How do I change it when I climb it again?’ It’s a progression, and you only get better by failing.”

Most people will not bulk up solely from climbing, but it works another part of the body: the brain. In life, as in climbing, Mike has found different paths to connect his physical and mental strengths. “It’s a physical thing, but it’s also a mental thing,” Sasorith says. “When I think about my job as a designer and climbing, I think about how they oddly connect with each other. It’s the idea of solving problems. When you’re climbing, you’re trying to figure out a route or a specific move to accomplish the route.

“Design is the same. I have to fix issues with whatever skills I have. It’s very mental, but you have to think on the spot. Granted you can always look at the problem and map it out, but it’s totally different when you get up there. What I thought was going to work didn’t work. Now I have to try and figure something else out.”

Prone to feel more accomplished once Mike’s finished a route or tried something new, the reward isn’t always clear until – like puzzle pieces – things start falling into place. “When you’re in front of the [climbing] wall, you see a hard problem,” Mike says. “I often concentrate and try to figure out the problem, and when I do, something happens. As you’re doing it, there’s that click in your head as you figure out your flow.”